The idea of Trading a single Forex Time Frame can be effective while analysing one chart but there are some alternatives which may reveal a more in-depth and thorough understanding of Forex market analysis for all currency pairs. A wider perspective can be gained from taking advantage of the different and wider angles involved.

In essence, entering a Forex trade could be comparable to crossing a street. Taking into account conditions and risk assessing the hazards, we can put in place some control and safety measures to prevent a potentially harmful or catastrophic incident. If for example, someone was in fact crossing the street to get to the opposite side, it would be a far safer strategy to take the time to look a little further, versus a quick glance at the immediate surroundings and then stepping off. Putting one foot in front of another and walking straight out is a rather simple but an extremely dangerous plan. Versus negotiating conditions, considering other users and looking up to see if anything distant was fast approaching. No one sets out to get run down and margin called but when you walk head long into the pathway of a number 13 Big Red London Double Decker Bus, then sadly and rather unfortunately, there is only going to be one outcome. So, with eyes wide open and the old grey cells fully engaged, just maybe this can help avoid a high speed collision. Looking a little further being the general idea with a safer Forex strategy but it does involve a more complex thought process.  It is not beyond the scope of reasonable thinking to know that every eventually cannot be cater for but with a forward thinking FX strategy and Forex plan in place, then this should go some way in creating an edge for the trader. Perhaps taking a different perspective in trading terms could be to examine Multiple Time Frames for the currency pair in question. A reasonable example of looking into FX Multiple Time Frames for help could be seen from some recent events in the Forex Currency markets, especially in light of BREXIT.

Worlds currency markets use various time frames as we know, like Daily GBPUSD as posted below which was in the main trading below the 200 MA, indicating a down trend in GBPUSD. Within this example in mind, further indications of the Forex Market direction were found by reviewing the 3Hr (or 4Hr) price chart.  In the case of GBPUSD below, the 3Hr Price action was ranging along the 200 MA. The 200 used here as a general example indicator which highlights the uncertainty of market sentiment within this period. The market could be interpreted as a counter trend to the daily and slowly rising in the 3Hr TF. However, as an observation and taking an overview of both 3Hr and Daily, it could be suggested that Daily Price Action had patterned to form a Bear flag, waiting to break short. Brexit may have presented an opportunity and an excuse for the Forex Market makers to shove GBPUSD overboard, again, but as mentioned earlier, I suppose something had to start the short ball rolling.

Most Price movement on Forex charts is more easily read through the larger time frames but once experience is gained then reading the markets more clearly will occur throughout every time frame. One way or another as Price can never stand still and how Price structure is viewed is down to different traders perspective. So, in short and no pun intended, the two Time Frames were forming patterns caused by market sentiment. Fundamentally in this period of waiting for the results of the European Union Brexit referendum. The latest result bring along nothing to GBPUSD except more of exactly the same and an acceleration of the already known downward Trend. This now continues to be the case and will do, right to the point, when it does not!

Powerful moves occur in Trading Price action along with more subtle moves but once mapped correctly and synchronised in Multiple Time Frames could maybe give grounds to postpone a trade if time frames were not aligned to the trade being planned. i.e. If a trader wanted to go with the daily down trend they would have to sit on hands and wait until market opportunities presented themselves in a way previously described. Fundies presented themselves but reviewing Techs as confirmation and entry. In using time travel so to speak and zooming into a smaller time frames to track the price and dynamics of the current market. For the trade in the direction of daily, the safer option of seeing further would mean putting the trade on ice until market conditions suited that strategy. Equally, with a ranging daily and 3Hr Time Frame, it would be possible to take short term trades both directions but again, Multiple smaller time frames would need to be analysed. This would require keeping a watchful eye on swing or scalp trades.

And closer inspection of a 1 hour Forex chart should start to put a better perspective on potential trades and just maybe give the necessary edge when all frames are aligned to some degree. By virtue of simply paying attention to Multiple Time Frames would then give a clearer picture for all strategies involved in Trading. i.e. Trend, Swing, Scalp. The FX trader should think about aligning time frames if trading with the Trend and if not following that strategy then the idea should certainly involve being aware of the market they are getting into. This will go towards strengthening the analysis for the swing trader and/or opportunistic scalper to spring a trap if trading against the main trend.

Secret and hidden Price Structure unveiled with implementation: Establish the Trend first before moving on with any market analysis. Thereafter, take Multiple Time Frame Analysis a little Further. Here in this example below a 5min GBPUSD Chart entry strategy gave some clues. It would also be a good idea to examine time in a few frames below the actual Time Frame being traded. This would provide a satisfactory level of pin pointing the entry, although as we know nothing is absolute here in Trading Forex. 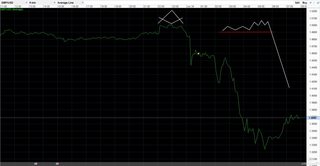 Trading with the Chart to the right displays a narrow sideways channel, ending in a Head and Shoulders which breaks short. Needless to say the channel also broke short and entry here for me at least, was found via EPR M5 continue. The 200 MA may or may not be of use to the reader here as it is intended to be a general view, as might not be any of the patterns, fundies or even Trends or counters as previously described. Traders see what they see and know whatever their logic or experience leads them to. So following technical analysis and then improving the knowledge base is all part of a Traders journey.

System or a process for learning price action are through as many different time frames as possible to improve the performance and unlock some of the mysteries of Price Structure. Practise makes perfect, so make the time to analyse markets in the larger frames as well as tracking and establishing the minor frames. Test your skills on other pairs and be patient while waiting for the Markets to unfold.

And another important thing is knowing what a trader wants from the Multiple Time Frame Analysis and Strategy. i.e. Trend, Swing Intraday. As an idea, the Time Frames which best identify to these traders are: A Position Trader would want to use Weekly or Daily Charts. A Swing Trader using mid time frames like 4hr to 1hr Charts. An Intraday Trader using the lower time frames from 15 Minute through to the minors which is dependant upon experience and ability.

Strategy and how development of this can deliver positive results when they are followed through and provide another level to a Traders Arsenal of weapons, tips, tricks and tools. However, I can only hope the principle of Multiple Time Frame Analysis as described above will mean something to someone some day. In the meanwhile mind the Bus, listen out for the Trolley and Trade safely.

GBPUSD Set Fire to the Rain 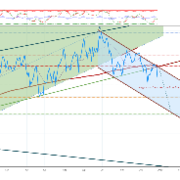