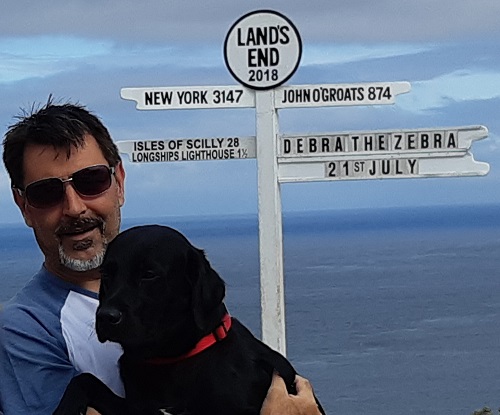 Yep its the real Billy the Springador in that snap shot with the Atlantic Ocean behind him!

Land's End is mainland Britain's most south-westerly point and one of the country's most famous landmarks. From the 200 foot high granite cliffs that rise out of the Atlantic Ocean you can gaze across to the Longships Lighthouse, the Isles of Scilly twenty eight miles away and beyond that, North America. Which is a bit of a swim! "Billy the Kid, as solid as a rock" Sir Gissa and Billy tested Beers and Ales from the First Inn in England and can report thumbs and paws up, all is good!

Share a post on or off topic at Bloggers Corner with the community. Try to avoid just simply posting a link or video and saying this is great. Explain what makes it great or how this was useful. Sometimes things are simply entertaining and so say what you enjoyed about it. Descriptions with as many details are always interesting to read and so say what interests you.